For discussing news, current events, films, gaming, rumours and all things that are going on in the world. Generally, anyway. No spam or thread will be removed.

So hyped. The "1-shot", 30 minutes restricted demo is out, on all platforms this Friday, 11th January and I cannot wait! I'm sure the PC version will get some kind of 'fix' so that we PCMR peeps can play the demo further.

Who's getting this puppy? If so, on which platform?

I’m there day one for the game, tin and all. Just try and stop me.

But everything is telling me to ignore the demo. I think, seeing as I beat the original to death hundreds of times, and at the same time have seen waaaay too much already of the remake, j may leave the demo.

It’s going to be painful... but it’s out in like two weeks!

You’re an idiot if you don’t get this btw. *cough* Nicolás *cough*
Lead Designer For Team Blur Games
Visit The OverDose Webpage & Forums

“It’s third person, I no play this!

But I play Lara, she has the boobies!”

RE has boobies too, that's why I own a couple...
Lead Programmer, Team Blur Games
Visit The OverDose Webpage & Forums

You own a couple? You’ve never even touched a couple :lolno:
Lead Designer For Team Blur Games
Visit The OverDose Webpage & Forums

You own a couple? You’ve never even touched a couple :lolno:

Enjoyed the demo a lot, really cool. However I wouldn’t be me without listing the issues I had with it:

- The game runs on the Pro\X with no enhancements, for the demo anyway. That means the Xbox One X is running at 900p and looks blurry as hell. I’m hoping this isn’t a RE7 situation where the TXAA totally destroyed the 4k image and made it look like 1080p.

- HDR is totally broken. As in it works, but... ugh... god damn is it bad. Probably the most pointless I’ve seen. It doesn’t change anything at all, other than make dark black areas bright grey. This is capcom, so I doubt HDR will be fixed. So... turn it off. Doesn’t make dark areas pure black but it’s better.

- As with all RE games the guns sound awful.

- The music... god damn it... there isn’t any. You hear a little every so often, very soft and very quiet, and then nothing again. It’s just not right. Walk into a save room and the music barely does anything, then stops... so strange. Compare this to the classic and...

- Gou can’t then off pop ups, so you have shit loads of icons all over the screen. If you want them off you I’ve to turn off everything... including the crosshairs.

- There’s no title announcer. This is punishable by death.
Lead Designer For Team Blur Games
Visit The OverDose Webpage & Forums

Tried the PC version yet bauss? It's out now

Aye been playing it with the trainer, unlimited ammo and time

Utterly fantastic port, smooth as silk, brilliant looking, some amazing gore when you shoot things. Didn’t notice just how much you can shoot the zombies? There’s one hanging on the ceiling in the old licker coridor, and you can just take chunks off it... awesome

Ugh... This is why I hate AA solutions... Look at this shit: 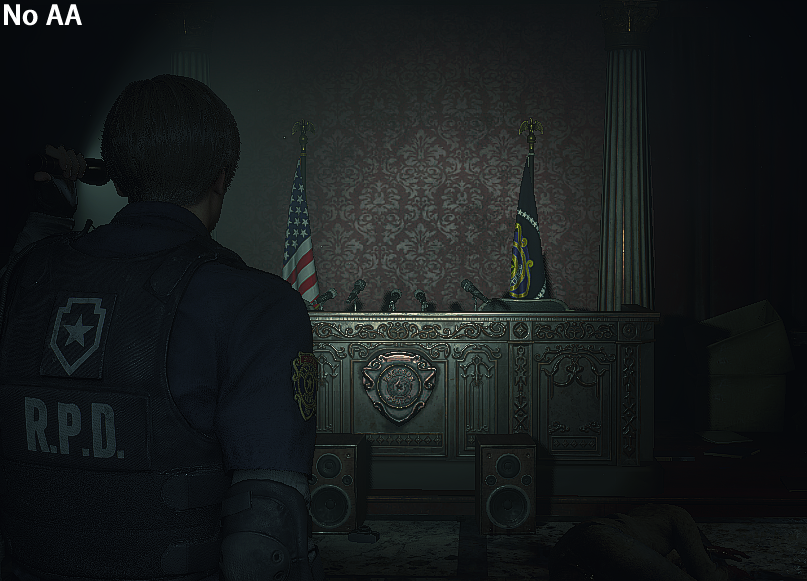 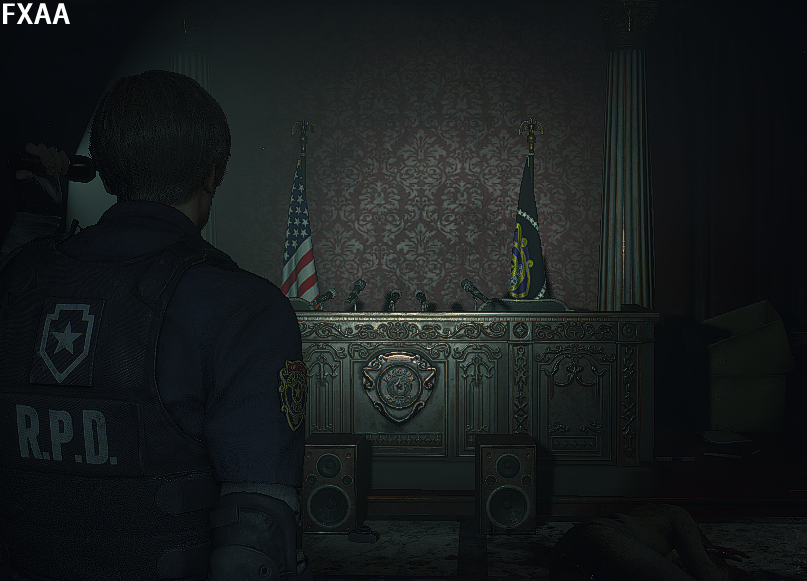 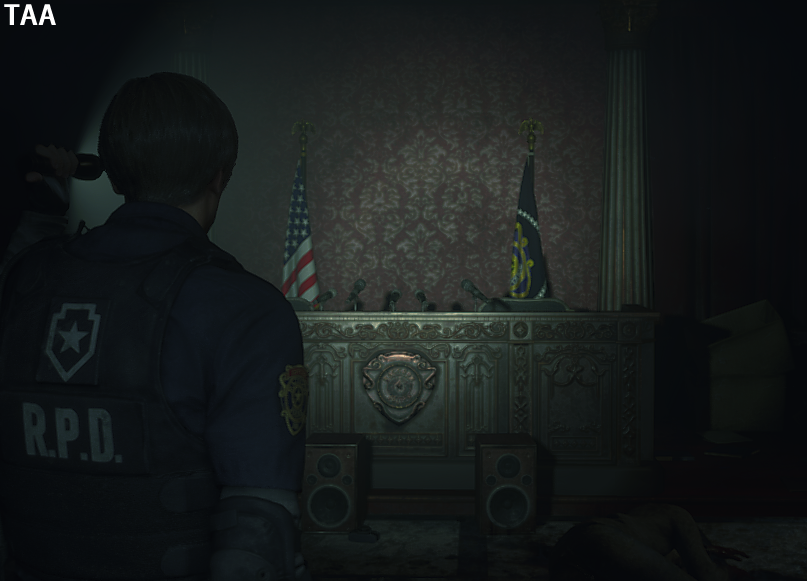 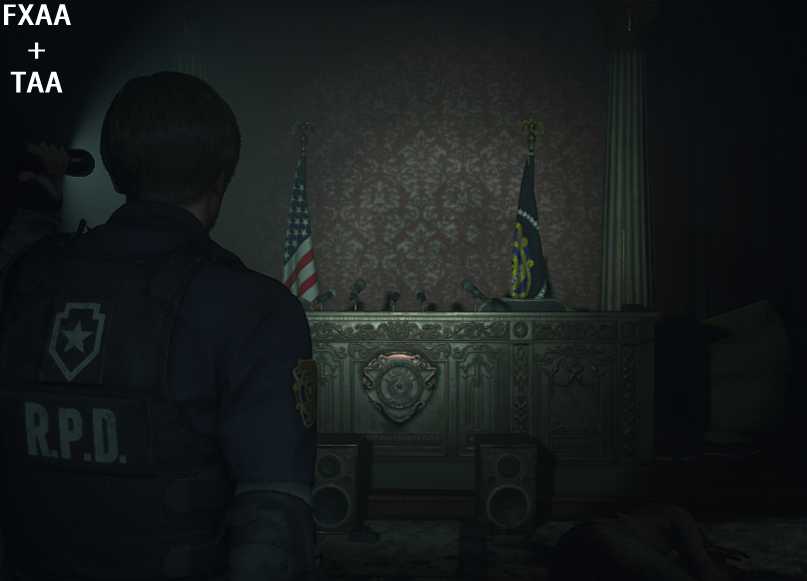 So I made a little video

Man I can’t believe we are less than 2 weeks away for this...
Lead Designer For Team Blur Games
Visit The OverDose Webpage & Forums

Ugh... Just read the cut enemies, which makes no sense...

Plants
are definitely in, one of the devs confirmed it on a stream last week. Seems their main focus is on zombies this time around. Either way, i'm still looking forward to the game.

Man I hope they haven’t cut too much, I wanted more added, not removed. Some of the excuses I’ve heard thrown around make no sense. I would assume it would be more to do with controls now it’s third person, and certain things being harder to hit... Yet I could hit them just fine in RE4...
Lead Designer For Team Blur Games
Visit The OverDose Webpage & Forums

The Alligator almost didn't make it in too, according to a recent interview. They were struggling to find ways to add it. But, there it is. Perhaps they're saving the cut stuff for paid DLC. This is Capcom, afterall

So, I just spoiled Claire's intro for myself. Wow, juicy burger!!! Even more stoked to play the game now. That's it, no more peeking at leaks. Going to wait til Friday. :P

Ugh... Just saw the new designs of the:

Why?! Why did they do THAT? Ugh... It seems everything is just based on a damn zombie now... So with the removal of:

Plus not including ANYTHING to do with:

Extreme Battle
I'm really getting a bad taste in my mouth... After REMake added so much new stuff, they seem to be removing stuff all over the place

At 10 hours play time for a newbie, that will equal just a couple of hours on my first run, and quick as soggy tits on a speed run. I did RE7 about a dozen times start to finish, and I got the run time down to less than two hours, easy. I'm a little concerned they are removing too much here... Its quite clear they didn't have the budget they should have done. But... Capcpom gonna Capcpom...
Last edited by Gavavva on Mon Jan 21, 2019 10:27 am, edited 1 time in total.
Lead Designer For Team Blur Games
Visit The OverDose Webpage & Forums

Guess what else is confirmed to be cut?